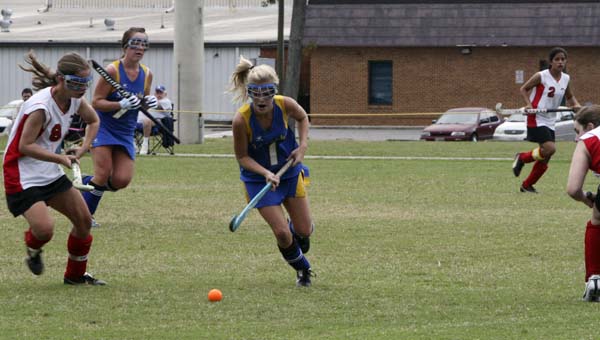 Brooke Starling was one of Nansemond-Suffolk’s main scorers last season and she’s one of the returning players for first-year head coach Ashley Aston. The Lady Saints start their season on Sept. 9 by hosting Walsingham. -- Andrew Giermak/Suffolk News-Herald

SUFFOLK—After a four-year field hockey career at Virginia Commonwealth University, Ashley Aston knew she wanted to stay in the sport, likely as a coach.

Aston considers herself lucky to have found a head coaching job practically right away, and in her hometown as well. It’s only a little across town from where she was a standout defender for Nansemond River.

As a Lady Warrior, Aston led Nansemond River to winning seasons and a number of runs into the district and regional playoffs.

The Lady Saints reached their conference semifinals and the Virginia Independent Schools State Tournament two seasons ago, but dropped to a 4-13-1 record last fall, so Aston is taking up a definite challenge in her first campaign as a coach. Aston replaces Kathleen Hotte who led NSA’s varsity team for 10 years.

Tryouts started only early last week and, at least as of Wednesday, Aston was still working with the whole group of Lady Saint players, from seventh-graders to seniors.

“The girls have been great. They definitely are showing me they want to be out here. I’m already expecting a lot of good leadership from the upperclassmen and the seventh- and eighth-graders have been working just as hard, so it’s been great,” Aston said.

“I always wanted to be a coach at some point. I didn’t know an opportunity would open up this quickly,” Aston said.

Aston played for Darryl Yandle at Nansemond River. As a defender for the Lady Rams, she started 30 matches during her last three seasons. She believes she’ll combine what she learned at the high school and college levels to lead the Lady Saints.

“I want the girls to be motivated to be out here. Yeah, we want to have fun playing the game, but we want to compete, too,” Aston said.

Aston still has a little bit of time to work with her new squad, and for her new players to get used to her. The Lady Saints open up on Sept. 9 hosting Walsingham in a non-conference match. It’ll be an interesting measuring stick right off the bat as the Lady Trojans defeated NSA by scores of 3-0 and 2-0 last season.