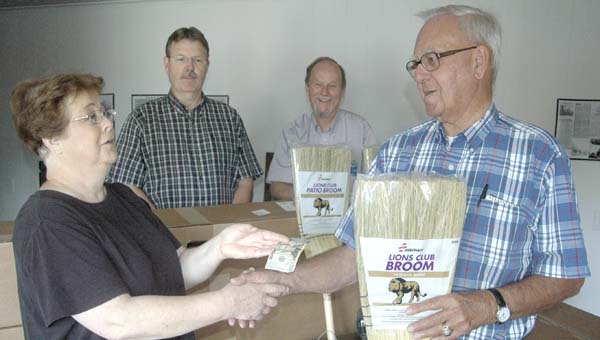 Janice Reames of Boykins purchases a Lions Club broom from Boykins Mayor and former club president Spier Edwards as club treasurer David Phipps (center left) and club president Brett Bunch look on in Boykins on Wednesday. Revenue from the broom sales goes back to the community.

Club members and local businesses are selling brooms, which come in two sizes and are made in North Carolina by the blind and visually impaired. A light broom costs $9 and a patio broom costs $9.75.

“We used to sell them door-to-door, but that was some time ago,” Boykins Mayor Spier Edwards, who is a Lions Club member and a former club president, said Thursday. “We would like for people to contact us, and we will deliver the brooms to them.”

The Boykins Lions Club was chartered in 1946, currently has about 21 members and is the only club chapter in Southampton County. The club recently followed the lead of other clubs nationwide and is extending membership to women.

The Lions are the world’s largest service club, and since the Boykins chapter was founded it has given about $193,000 to the community. The club also provides services, including vision screenings for young children and eye exams, glasses and hearing aids.

“There are people that are in need,” Edwards said. “Sometimes people get in trouble with their electric bills or medical bills. If we see people that are in a real need, we’ll step up and help them. We try to help anybody that’s in any type of need.”

The Lions send a bus several times a year to Southampton High and Middle schools and Southampton Academy to provide students vision screenings.

This year, the club hopes to sell about 250 brooms. Brooms can be purchased by calling club treasurer David Phipps at 654-0776, club president Brett Bunch at 654-0920, or the Boykins Town Hall at 654-6361. The brooms and other cleaning tools are on display and for sale at Boykins Beans and Ice Cream.