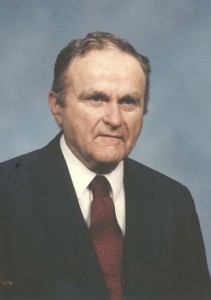 Born on May 5, 1923, in Salem, Va., he was the son of the late Robert Franklin Bain and Marion Thomason Bain.

The family wishes to acknowledge Robert Bain of Wakefield, whose frequent visits with Jack provided fellowship and good humor that have been especially helpful in recent years.

In 1943 he enlisted in the U. S. Army and served for three years in World War II including tours in England, France and Germany. He received his Honorable Discharge in 1946 and returned to classes at VCU. He also commenced classes at the Virginia School of Law.

Entering the family business in 1947, Jack became trustee and bookkeeper of the T. L. Bain Estate of Ivor.

Active in a variety of business, civic and church organizations over the years, he was a member of the Board of Directors of the Bank of Sussex-Surry from 1947 until the bank merged with BB&T in 1999.

He was a 32nd degree Mason with the Wakefield Lodge # 198 and he was a Shriner. He holds 50-year pins from both organizations.

He also belonged to the Wakefield Sportsman’s Club, the B&B Hunt Club of Wakefield and was a valued member of the Tidewater Academy Board of Directors for 25 years.

A lifetime member of Wakefield United Methodist Church, Jack spent many years as Sunday School treasurer and also served as chairman of the Administrative Board and the Board of Trustees.

A funeral service in Jack’s honor will be held at the Wakefield United Methodist Church on Saturday, August 28, at 3 p.m. by the Revs. Edward Owen and Willie Guill. Burial with Masonic rites will follow at the Bain family lot in Wakefield Cemetery.

The family will visit with family and friends from 1:30 to 3 p.m. prior to the service in the Fellowship Hall of the church. Memorial donations to Jack’s memory are suggested to the general fund of the church, P.O. Box 87, Wakefield, Va., 23888.

The Purviance Chapel of J. T. Morriss & Son Funeral Home, Wakefield is in charge of arrangements.