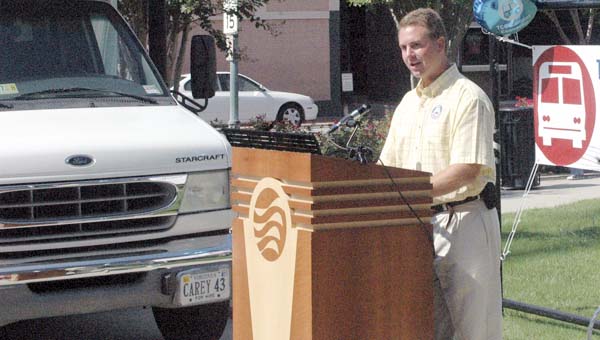 Al Faison speaks during the launch of Tidewater Community College’s new shuttle service in Norfolk Monday morning. Faison, who was laid off from International Paper Co.’s Franklin mill in May, is now attending classes at TCC.

NORFOLK—Before this summer, Al Faison had never taken a college course. And before last October’s announcement that International Paper Co.’s Franklin mill would close, he never thought he would.

“They were my first ever college courses on any campus whatsoever,” he said. Faison isn’t alone.

Officials at Paul D. Camp Community College said a number of former IP workers are enrolling in non-credit courses and even pursuing new careers. Between December and June 30, 159 displaced mill workers had taken advantage of at least one non-credit workforce development course at PDCCC.

PDCCC President Dr. Paul Conco said the college is adapting to serve the needs of the community.

“We have tailored assistance and help for those who need it,” he said. “Our mission is to serve the community and these are challenging times and Paul D. Camp Community College certainly wants to step up to the plate and be there when people need us most.”

Former IP workers are also taking advantage of the Trade Adjustment Act, the Workforce Investment Act and other grant programs.

“I never would have this opportunity ever again in my life to have the education paid for,” Faison said. “You can use these programs that have been put into place for our paper mill employees because I am doing it and I have run across other people that I know here at TCC that are using them,” Faison said.

Dozens of displaced workers have enrolled at PDCCC using the same programs.

Faison finished his first semester of classes with a 4.0-grade-point average in his prerequisite courses.

TCC officials even asked Faison to speak during the launch of the school’s new shuttle service in Norfolk Monday morning.

Faison said the marketability of medical careers and his desire to help people led him to pursue radiography.

“I love people and I want to help people in some form or fashion,” he said.

Faison is glad that his former coworkers are working to get back on their feet.

“People are moving on. Some have got jobs, some are going to school,” he said. “Franklin is home, and I want that community to still prosper and survive. I’m planning on staying after I get my degree — I may have to commute — but I plan on staying.”