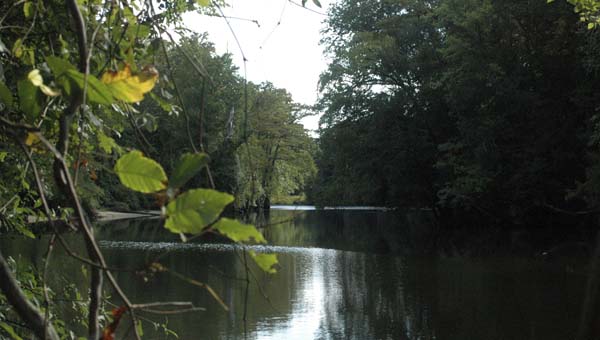 The Nottoway River, including this section looking south from the boat landing at Shady Brook Trail and General Thomas Highway, qualifies for inclusion in the Virginia Scenic River System. -- Charlie Passut | Tidewater News

COURTLAND—The Virginia Department of Conservation and Recreation says about 33 miles of the Nottoway River in Southampton County qualifies for the state Scenic River System.

In response, the Board of Supervisors on Monday scheduled a public hearing to discuss the matter at its 7 p.m. Monday, Sept. 27, meeting. The board could then adopt a resolution of public support.

Danette Poole, DCR division director for Planning and Recreation Resources, said citizens and staff from her department and the Department of Game and Inland Fisheries paddled the first segment of the Nottoway from Carys Bridge to the Cypress Bridge Natural Area Preserve on May 19. A powerboat was used to explore the second portion of the river, to its confluence with the Blackwater at Battle Beach, on May 20.

“On the basis of (the) field study, this river segment was found to qualify as an extension of the existing designated portion of the Nottoway,” Poole said in a July 29 letter to county officials.

The scenic river program is designed to identify and protect significant river resources.

Southampton formally asked DCR to evaluate the Nottoway in September, the first step in an effort to reverse a 1988 decision by the county board to halt the river’s scenic designation at Carys Bridge Road, Virginia Route 653.

Portions of the Nottoway totaling 39.5 miles were designated as historic in 1979 and 1992. The scenic section runs from Virginia Route 40 at Stony Creek in Sussex County to Carys Bridge Road.

The Nottoway is one of two scenic rivers in Southampton County.

A 56-mile section of the Blackwater River — from Proctor’s Bridge Road, Virginia Route 621, to the confluence with the Nottoway — was added to the Scenic River System in April. The Blackwater and Nottoway combine to form the Chowan River at the North Carolina state line.

A third river, the Meherrin, forms the border between Southampton and Greensville counties. According to the DCR, the Meherrin is classified as a “potential component,” meaning it is worthy of future study for inclusion as a scenic river.

Thirty-seven miles of the Meherrin in Brunswick County were added to the scenic river system in 2006.