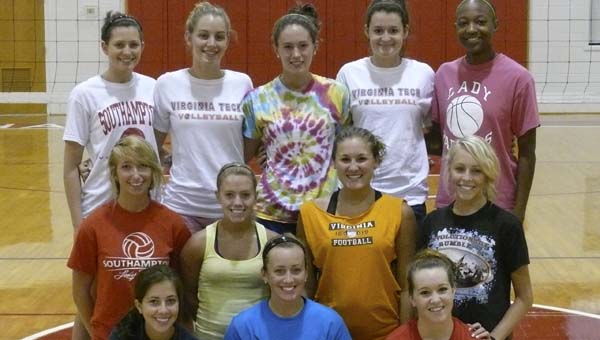 “I have high expectations, just like I did last season,” said second-year coach Chad Brock. “I felt like we underachieved last season, so we’re going to work hard not to let that happen again this season.” 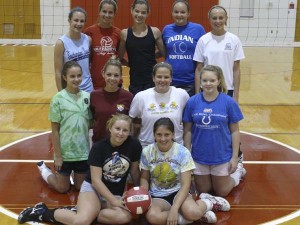 The Lady Indians are going into their second season in the Southside District. The girls placed second in the league behind Powhatan High School. The squad’s key players are Kendra Edwards as primary setter, Marisa Cabell and Regina Artis, both middle, outside hitters Janie Young and Megan Revelle, and hitter and setter Candace Earls.

Jenna Story, who has improved a lot from last year according to Brock, will be backup at middle.

“We’re in the weight room, doing extra conditioning, trying to get stronger,” Brock said. “Whatever happens this year, we won’t have any excuses.”

Powhatan’s going to be the team to beat this season, he added.

“I don’t know what Bluestone has this season. I know they lost one of their top players from last season,” Brock said.

He expects Windsor to be strong again.

“I don’t think they lost anybody,” Brock said. “These should be our toughest matches.”

The Lady Indians will participate in the Virginia Beach High School tournament, which will consist of 32 teams.

“I know we’re going to see some competition there; (we’re) looking at AAA teams from Northern Virginia, Chesapeake and the North Carolina area,” Brock said. “That’ll be a good way to get the season started off.”

The Lady Indians lost a little bit defensively, but with the people coming up, he believes he can fill that role.

“If somebody were to get hurt, or if I need to sub somebody in, I have six juniors and two more seniors who can come in behind the starters and plug those holes,” Brock said.

“I feel good going into the season,” he added. “We’ve just got to clean up; we’re a little rusty right now.”

Going to camp at Virginia Tech, the girls learned a lot about what they can work on as a team.

“We went to UNC in previous years and wanted to do a little something different this year,” Brock said. “We went up there, it was hot, and the girls seem like they got a lot out of it.”

“This was a great clinic,” Brock said. “We were just looking for a change of pace.”

“I’m hoping to repeat last year’s record and become district champions again,” Schools said. “I don’t really know who our toughest competition will be this year because JV teams seem to change yearly as expected.”

“I think we are going to be able to compete with the best,” Schools said. “We’ve got a lot of potential in a lot of returning players. They’re teaching me right now.”

She said she looks forward to working with volunteer coach Linda Drake.

“I loved it,” Schools said. “The Virginia Tech staff gave me a lot of pointers. They took a lot of pressure off of me because they looked at my team and put my players in the position that would benefit the team the most.”

“They gave me their strong points and where they would play the best,” she continued. “I’m looking forward to a winning season.”