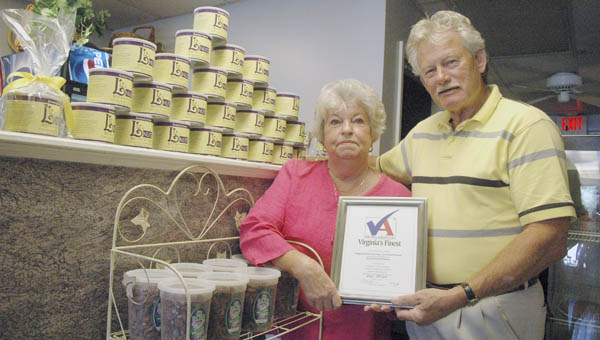 Liz and Herbert Britt, pictured here in September, are planning to move their business to the former Parker Drug building in downtown Franklin. -- File Photo

FRANKLIN—Liz and Herbert Britt, owners of Simply Divine Catering, plan to move their business from its current location on Armory Drive to the Parker Drug building in downtown Franklin.

“We’re going to keep the name because it will always be Parker’s,” Britt said. “We’re going to feature a lot of Franklin’s entrepreneurs, and encourage other people to follow their dreams too.”

An opening date for Simply Divine Catering in its new location has not been set. The business has been at a former 7-Eleven store at 931A Armory Drive for about four years.

Britt will sell her “Liz is Nuts” pecans and other locally made products from the store at 102 N. Main St. She plans to use the former pharmacy section for nut packaging and storage.

The store will also feature a “ham corner” — for deboning, slicing and shipping hams — and will retain a lunch section named “Parker’s Corner.”

“We’re going to try to have some of the history displayed on the wall,” Britt said. “We want to try to keep it to where Parker’s still goes on and people can reminisce. I think it will be good.”

Britt said she plans to add more tables to serve breakfast and lunch. She will have a menu featuring items served at the Parker Drug lunch counter and bring back the original hot fudge cake from her Teddy Bear Restaurant’s days.

“That way, we won’t interfere with Fred’s Restaurant and the Grey Fox,” Britt said. “Once we all work together and we find other novelty stores to move into downtown, then we will be open Saturday and Sunday. We’ll then be able to pull in traffic like Smithfield.”

The Britts will lease the building from Ed and Glenna Canada, who owned Parker Drug. Liz Britt said she is looking for a larger stove for the building.

“I would love to be in there by mid-September, but I’m going to have to pull a rabbit out of a hat,” Britt said.

“We’re very happy with it,” Glenna Canada said. “We didn’t want to close the fountain, so we’re very excited to see someone build on downtown Franklin and keep the fountain open.”

Asked if there is a timeframe for when the Britts might lease the building, Canada said, “as soon as possible, as soon as we can get our ducks in a row. We haven’t signed any papers or anything.”

Dan Howe, manager of the Downtown Franklin Association, said he was thrilled about Simply Divine possibly moving to Parker’s.

“I think it’s wonderful,” Howe said Monday. “It would re-establish a cornerstone location in the downtown. It’s one of the best locations in the downtown that a business could have.”

“Every business that can be added to the downtown is great, but it’s refreshing to add retail or food businesses,” Howe added. “You need a variety, an ideal mix of business types in a downtown. The service businesses that are already downtown will help support retail and restaurants, and vice versa.”

Britt said she had already spoken with several other downtown merchants and that many of them offered to assist her with moving and setting up shop.

“My vision is downtown,” Britt said. “I want to see downtown come back to life. We need that. We’re looking to pull visitors from Chesapeake and Smithfield to come visit us and cruise down our streets. But we’ve got to put something in these empty buildings.”

The Britts roast about 160 pounds of pecans a week and sell them, and other products, at 47 stores nationwide under the “Liz is Nuts” label. In September, the Britts earned the right to add the Virginia’s Finest seal to their products by the Virginia Department of Agriculture and Consumer Services.

Parker Drug first opened its doors in 1887 and became an icon in downtown Franklin. The pharmacy closed in December.